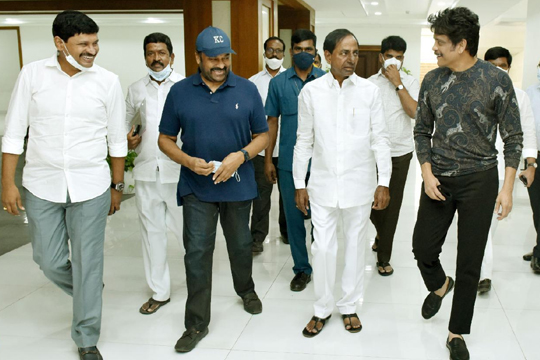 Telangana Chief Minister K. Chandrasekhar Rao has said that a new film city with an airstrip will be set up in 1,500 – 2,000 acres in the outskirts of the city.

“The government will acquire 1,500 – 2,000 acres for this purposeaProvision will be created at the proposed film city for an airstrip. All other infrastructure facilities will be provided,” said Rao.

He said plots will be allotted to film production companies to set up studios with state-of-the-art technologies to meet the needs of the future in the new facility.

The CM instructed that a delegation of officials and film personalities should visit such as film city in Bulgaria to prepare proposal for a world-class facility in Hyderabad.

According to Rao, there are ample opportunities in the tech city to further develop and expand the film industry, which is already famous for Ramoji film city.

“People from different parts of the country and different mother tongues have settled here. This city has the ability to offer shelter to anyone. Wonderful facilities can be created here for film shootings and all other film making activities to take place comfortably,” he observed.

The Chief Minister said about 10 lakh people are directly and indirectly dependent on the film industry for livelihood in Hyderabad, who all got affected by the cancellation of shootings during the lockdown.

He called for the resumption shootings as well as cinema halls, following Coronavirus guidelines.

Film actors Chiranjeevi and Akkineni Nagarjuna met Rao and told him that shootings have resumed. They informed him that theatres would reopen soon.